Welcome to Zebedee List no 400! That’s over 33 years of continuous monthly publication – where did that time go?!

It has been good to see balloons airborne again of late flying in accordance with the Covid restrictions still in force. This culminated with the launch of over 40 balloons on Monday morning (3rd August) from Ashton Court, Bristol in perfect sunny conditions as a reminder that it should have been the annual Bristol Balloon Fiesta this week. The event was organised in great secrecy to avoid crowds at the launch site – which was not notified until the last minute. Well done to the organisers for a very successful event. Plenty of trading has been going on of late with the Cameron Voyager bottom end advertised last month being quickly snapped up together with two burners and an array of smaller items. New for August we have a virtually new hopper envelope (G-HEAL), a trio of Cameron baskets, a trailer, 8hp fan and more bits and pieces.

Very sad news this month is the death of Graham Hallett on 27th July after a long battle with cancer. He was part of the London Region from the eighties, working from the Thermal Aircraft premises prior to marrying Lindsay Muir and moving to Montgomery. When EASA came about in the early 2000s, in order for the BBAC to continue to hold its delegated responsibilities for ballooning on behalf of the UK CAA, it needed to form a Continued Airworthiness Maintenance Organisation (CAMO) and Graham stepped forward to become its first salaried Chief Technical Officer (CTO). Being an expert on ISO quality systems he was a natural choice for ploughing through endless EASA directives to ease us into the EASA airworthiness systems. He continued in this role, keeping abreast of the many changes – and leading many of the BBAC inspired modifications to the system at EASA, right through till late 2019 when he handed over the task to Glen Everett. Our condolences to competition pilot Lindsay and their ATCO daughter Chloe.

Simply by subscribing to our free Zebedee News service, you can be kept up to date with what's new … END_OF_DOCUMENT_TOKEN_TO_BE_REPLACED 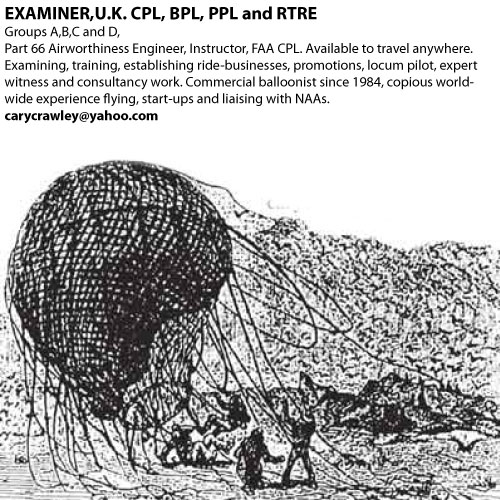